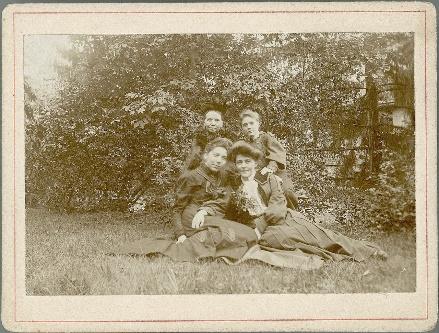 Kathleen Cruise O’Brien (née Sheehy) (1886-1938). Born in Co. Tipperary, Kathleen was the youngest of seven children. She was a teacher, suffragist and Irish language enthusiast and came to Coláiste na Mumhan, Ballingeary 1906 as a student.

She had three sisters who survived to adulthood, of whom Mary married Thomas Kettle and Hanna married Francis Sheehy-Skeffington (né Skeffington). With Mary and Hanna, Kathleen founded the Irish Women’s Franchise League in 1908 and she was an active member of the Young Ireland Branch (YIB) of the United Irish League (UIL), the only branch which admitted women.

In 1916, all three of Kathleen’s sisters were widowed. Notably, Francis Sheehy Skeffington was summarily executed by the British during the Easter Rising, in spite of having no involvement, and Tom Kettle died fighting on the Somme.