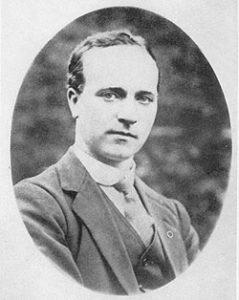 Tomás Mac Curtáin (1884-1920). Born Thomas Curtin in Mourne Abbey, Co. Cork, he was the youngest of 12 children. In 1902, he became the Secretary of the Blackpool, Cork branch of Conradh na Gaeilge. He was an active member of the Cork branch of the Irish Republican Brotherhood, under Sean O’Hegarty, a member of Cork Sinn Féin from its inception in 1907 and a founder member of the Volunteers.

He was interned in Frongoch following the Easter Rising and, in 1918, he became an IRA Brigade Commander. He was elected to Cork City Council and chosen as Mayor in January 1920 before being murdered by British forces just two months later.

Note the Fáinne badge (small circular pin) that he is wearing on his left in this picture; it was worn from 1915 by those who undertook to speak only Irish among themselves.